During Assembly of PLS-AL:MULLA PLS an important project to make Egypt a regional hub for Oil, Gas

Chemist Abdel Majid Hegazy: Financing the petrochemical industry represents a model for challenge and confidence in the petroleum sector Power News - Walid El-Bahsawy His Excellency the Minister of Petroleum and Mineral Resources, Eng. Tariq Al-Mulla, affirmed that the project of the Petrochemical Logistics Services Company (PLS) represents one of the successes of the important qualitative projects for the Egyptian petroleum sector, which keep pace with the state's plans and serve its development goals and an important step to make Egypt a regional center for trade and circulation of oil, gas and petrochemicals. It is also a strategic step on the road to developing the petrochemical industry, maximizing the added value of our wealth, providing new investment opportunities, strengthening and maximizing the exploitation of infrastructure from ports and others, localizing advanced technologies, enhancing the efficiency of supply and generation chains for this industry, providing facilities for storing and trading raw materials and exporting the final product. The establishment of a logistics services company is also promising. Petrochemicals, in continuation of the ministry’s approach to establishing integrative projects to serve the sector’s companies, with the aim of supporting capabilities, increasing production, and supporting plans and projects that achieve this. The General Assembly of the Petrochemical Logistics Services Company held its meeting on Sunday morning at the headquarters of the Petrochemical Holding Company to approve the 2019 activities in the presence of both the chemist Saad Hilal, Chairman of the Holding Company for Petrochemicals (AICM) and the chemist Abdul Majeed Hegazy, the head of the company Ithydco, which contributes 60% of the shares of the Logistics Services Company And the presence of the next chemist, Hussam Al Fahmy, President of the Petrochemical Logistics Services Company. For his part, chemist Abdel-Majid Hegazy expressed his thanks and appreciation to His Excellency the Minister of Petroleum and Mineral Resources, Engineer Tariq Al-Mulla, for this great support for the completion of this strategic project. Hegazy said that the petrochemical industry has become a target for investments in Egypt that expresses the extent of confidence in the petroleum sector, its capabilities and capabilities. Hegazy expressed his thanks to the chemist / Saad Hilal, the head of the Petrochemical Holding Company, which owns 20% of the company's share, adding that Hilal has spared no effort in providing everything that would launch this project and overcome all challenges and prepare all the elements and elements of success necessary for all projects and subsidiaries and support various current projects And the future, including the petrochemical logistics services project and the polybutadiene plant project. Ethydco also received a great deal of this interest and support.

Hegazy added that the establishment of the Petrochemical Logistics Services Company is a window for the petrochemical industry in Alexandria and moves it to wider horizons and provides the necessary infrastructure and the necessary logistical support for it in terms of transporting, storing, securing and facilitating import and export operations in a way that serves current capabilities and future expansions and achieves additional competitive advantages for products with the best means and lowest costs.

Hegazy said that the idea of ​​the project is to establish a group of warehouses near the port, linking them by sea with facilities for loading and unloading ships, and linking them by land to the petrochemical companies' complex in the Nahda area in Alexandria.

Hegazy added that many steps have been taken in the way of implementing this project, 85% of the required licenses have been completed and the necessary approvals have been obtained, especially the maritime transport sector and the Armed Forces Operations Authority, considering the port of a special nature, and the port’s depth of 14 meters is a real addition instead of 10 meters in the depth of the oil basin. This contributes to reducing congestion in the oil basin and allowing more capacity for cargo and unloading vessels.

In addition, many facilities and buildings of Solvay Alexandria Company for Sodium Carbonate, which were acquired for the establishment of this project, have been developed, including pressure station, cooling water, steam boilers, and other facilities such as electricity, appliances air, drinking water, fire fighting, sanitation and industry, in addition to some warehouses as well as production workshops. The company's geographical location is located between the port of Dekheila and the port of Alexandria in the El-Max area on a land of 240,000 square meters. New lands have been purchased and annexed to the company to expand the establishment of warehouses to include petroleum and petrochemical depots, including warehouses for hexane, ethane, propane, raffins and butadiene. The lands of the old soda factory were allocated in Solvay Company, formerly for petroleum storage. The modification of the preliminary engineering designs has been completed, and preparations are being made to launch implementation tenders in cooperation with sister engineering companies in the petroleum sector The environmental impact study and the beach equilibrium study were also completed, and an environmental consultation session was held with representatives of the civil society in the region in order to explain to them everything related to the project, its dimensions and its effects, especially the environmental, economic and social, and the company's plans in this regard, which was accepted and supported by the attendees considering what they had touched. Ensure that the company places the interest of the people of the region and society in general on an equal footing with the interest of the company.

In turn, the chemist / Hossam Al-Fahmy, the next president of the Petrochemical Logistics Services Company, expressed his thanks and gratitude to all those who contributed to the beginnings of this project and paved the way for its success and its launch, expressing his hope that all efforts towards achieving the aspirations and desired goals of establishing this vital and strategic project for the petrochemical industry It is noteworthy that the petrochemical logistics services project was completed after the acquisition of three companies, namely, Ethidco with a 60% stake, EKEM with a 20% stake, and Sidec City with a 20% stake in Solvay Alexandria. 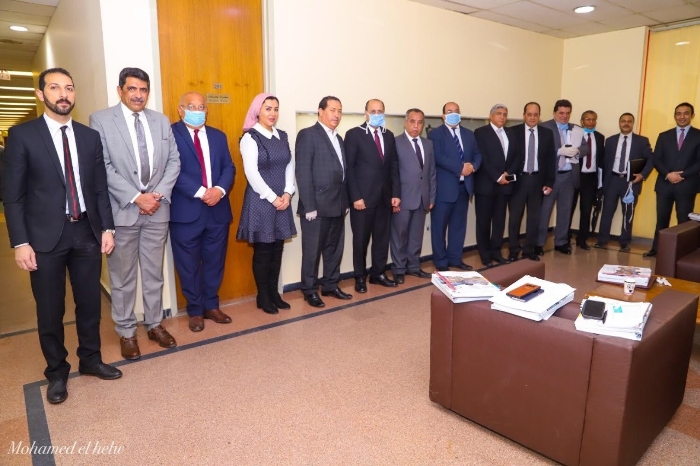 Chemist / Hossam Al-Fahmy, the president of the Petrochemical Logistics Services Company, expressed his thanks and gratitude to all those who contributed to the beginnings of this project and paved the way for its success and its launch, expressing his hope that all efforts towards achieving the aspirations and desired goals of establishing this vital and strategic project for the petrochemical industry